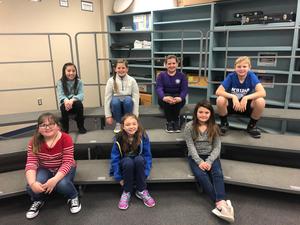 10 students from Dodd Intermediate School, will be part of over 225 students from across North Texas performing in the 23rd Annual NTCC Festival Concert held at The Meyerson Symphony Center in the Dallas Arts District on February 2nd.

More than 225 fourth, fifth, and sixth-grade voices from 17 North Texas schools across six districts will participate in the 23rd Annual NTCC Festival Concert at 2 pm on Saturday, Feb. 2 at The Meyerson Symphony Center in the Dallas Arts District.

North Texas Metroplex Children’s Choirs, Inc. (NTMCC), which is a 501(c) (3) nonprofit umbrella organization over NTCC and three other choirs, sponsors this event.

Seventeen schools from the North Texas area have auditioned and selected 225 singers to perform in this All-Star concert. Schools are from six area districts including Birdville, Krum, Northwest, Plano, Prosper, and Wortham.

Dr. Julie Yu-Oppenheim, co-director of Choral Studies at Kansas State University and President-Elect of the Southwest American Choral Directors Association, will be the guest conductor for the 2018 concert.

The event opens with the sounds of a Scottish bagpipe prelude from Don Shannon, Cheryl Neumann, Jarrod Fay, and Robert McCallion. The group of bagpipers will later perform the Scottish Gaelic piece “Scotland the Brave.”

The main fabric of the afternoon are the healing voices of 225 children from area schools performing in the Meyerson Symphony Center, one of the top ten best sounding concert halls in the world. Taking on an ambitious repertoire of songs from various languages and cultures, and diligently practicing after school for months with volunteer choir teachers, the children raise their voices in harmony for seven melodious pieces. Under the tutelage of guest conductor Dr. Julie Yu-Oppenheim, and Daniel Stipe as accompanist, the vision of NTMCC founder and artistic director Ann Smith will once again come to fruition for its 23rd year.

“At NTCC, we offer an opportunity for students to experience something much bigger than themselves,” Ann Smith said. “We are planting the seeds of music in their hearts, and as they grow up and have children of their own, they can share their love and passion for music. I like to think that we are supporting the arts through the ages.”

Tickets are still available online at www.ntchoirs.com with $30 or $40 options.

The North Texas Metroplex Children’s Choirs (NTMCC) also oversees two select traveling choirs, the Texas Youth Chorale (TYC: grades 6, 7, and 8) and the Texas Children’s Choir (TCC: grades 3, 4, and 5), along with hosting an annual festival for choirs from across the nation and around the world, the Texas International Choral Festival (TICF).

*The bulk of this article has been written and given to Krum ISD by North Texas Metroplex Children’s Choirs, Inc.